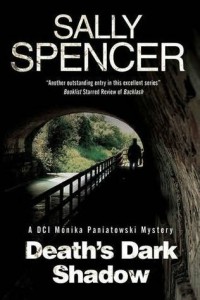 A nameless victim. An unknown killer. An impossible case for Monika Paniatowski.

Before she can even begin to track down the killer of the old woman dumped by the lonely canal, Monika Paniatowski needs to find out who she is - and no one seems to know. Even when her daughter Louisa provides the vital clue, it only makes life more difficult, because the Chief Constable - intent on making Paniatowski's life difficult - refused to let her follow the obvious trail. And it is not until there is a second, even more brutal, murder, that Paniatowski realises she will have to call on the help of her old mentor, ex-DCI Charlie Woodend.

*Starred Review* Despite DCI Monika Paniatowski being a more than worthy successor to DCI “Cloggin’ It” Charlie Woodend when he retires, fans of the likable curmudgeon will be delighted that Charlie makes an encore appearance in Spencer’s latest. When two Spanish nationals are murdered in Whitebridge, Monika and her team are faced with an investigation that is as challenging as it is frustrating. All leads seem to point to a motive buried in the turmoil of Spain just after Generalissimo Franco’s death. And so who better to help than Charlie Woodend, who has retired to the Spanish Costa Blanca and set up his own detective agency. The plot shows just how ruthless Franco was and what horrors his regime perpetrated—horrors that have echoed down through the years and resulted in the Whitebridge murder case Monika is trying to solve. With Charlie’s help and the support of her talented team, Monika cracks the case and even has a chance to see Charlie once more when he visits Whitebridge post-case. A final bombshell will leave readers shocked in this brutal, dark, gripping, and sometimes touching tale that is Spencer at her very best. A must-read. --Emily Melton

"A quietly compelling story for those intrigued by war crimes and the resulting fallout. Spencer’s admirable Paniatowski character has spun off strongly from the popular DCI Woodend series." (Library Journal)

“What looks like an open-and-shut case ends with twists nobody will see coming in Spencer’s most in-your-face outing for Monika yet.” (Kirkus Reviews)

Available from Amazon and Kobo. To view and Buy Online, click on the links to the right.